October 07 20:40 2022
Rashid Ahmed tells a gripping story about transhuman twins who make making first contact with the Framandi and together find alien diabolical wetware tech which enhances the abilities of their evolving AI “Kei.” 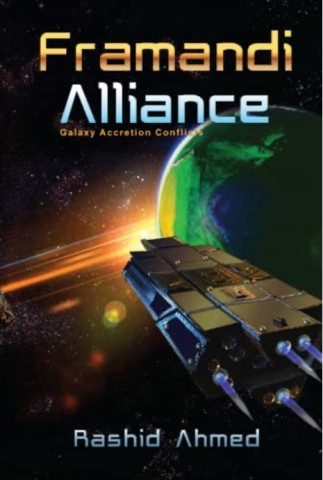 Framandi Alliance is a high-speed sci-fi space adventure novel with a narrative from a third generation independent AI’s perspective. The Novel is written by Rashid Ahmed, who has done a great job packing action and storytelling which keeps readers entertained while always leave them wanting more. Framandi Alliance is now available in hardcover on Amazon.

For readers interested in the main plot and the relentless quest for deep space galactic adventures, the book is about two transhuman twins who are tasked to explore an anomalous space object above the solar system’s ecliptic plane. The twins Jon and Asta, along with the crew of Att, make first contact with advanced species seeking passage through the solar system.

The twins uncover an ancient, ongoing intergalactic confrontation between the Canis Major Dwarf Galaxy and Milky Way. As these galaxies merge, territorial conflicts have arisen between species that could spill over into unsuspecting systems. The crew confronts the Giglis (a species that could devastate Earth) when they embark on a multi-system journey after forming an alliance of the knowledgeable Framandi.

During the confrontation, the crew finds and salvages a relic of an ancient Kilig infiltration spacecraft, left over from a battle centuries ago. The team installs a second-generation Human AI named Kei to operate this ship. But, when Kei merges with the existing operating system of the Kilig vessel, its objectives change as the AI realizes that the alien wetware technology could enhance its abilities. The AI then turns on the Gigils and the Framandi in the hope of destroying them, and then turns its attention towards Earth.

The Author, Rashid Ahmed, while talking about the book’s plotline, mentions that the Canis Major Galaxy is still being absorbed into the Milky Way. He hypothesizes that when galaxies merge, complications between existing species could lead to disastrous events. Intelligent species which may have evolved millions of years ago, could have occupied large areas of these merging galaxies. The merging could cause territorial conflicts to arise. In Framandi Alliance, such a conflict spills into the solar system, and the world’s fate lies in the hands of Jon and Asta who must overcome vastly superior odds to save the world they love.

Check out additional details about the book along with other articles by Rashid at https://www.rashidahmed.com/

Rashid Ahmed writes science fiction and knows a lot about online marketing. He has always been interested in how technology changes and affects people. He has worked in advertising and marketing in numerous roles, and now he writes books and tells stories designed for people who like immersive plots. Rashid’s writing is a good mix of concept details and easy-to-understand language. His interests include economics, ecosystem restoration, sustainability and permaculture.