Earthborn by Fei Bo, chief choreographer of National Ballet of China, premiered at the Finnish National Opera on September 30

October 10 13:25 2022
Earthborn by Fei Bo, chief choreographer of National Ballet of China, premiered at the Finnish National Opera on September 30

On the occasion of Finnish National Ballet’s 100th anniversary, Fei Bo, as the first Chinese choreographer to be commissioned by the company, shares with the international audience his unique thoughts and insights on the evolution of human civilisation and the cycle of life through a dialogue between primitive civilisation and modern society, with a contemporary and oriental philosophical perspective.

The project for Earthborn began in 2018, when the then Artistic Director of the Finnish National Ballet, Ms. Madeleine Onne, invited Fei Bo to create a one-act play for the company’s new Triple Bill: World Wide Dance which also features internationally acclaimed works Heatscape and Dust by renowned American choreographer Justin Peck and British choreographer Akram Khan. The three creators from completely different cultural backgrounds have come together to present a world dance journey with an international perspective. 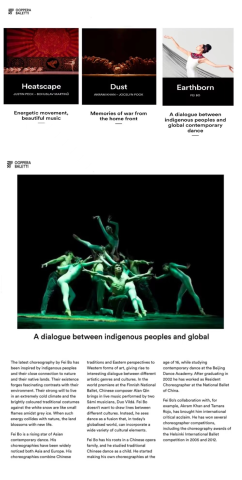 Fei Bo’s choreography was inspired by a trip to Finland in 2019. Arriving at the primeval forest from the busy city, Fei Bo was deeply touched by the power of nature and the indigenous people and their close connection to nature and their native lands. He experienced a cosmopolitan conversation between modern society and primitive civilisation that was constantly taking place between the metropolis and nature in Finland, in China, in any country of the world. The indigenous people of Finland forge fascinating contrasts with the extremely cold environment in which they live, and the brightly coloured traditional costumes are like tiny flames in the ice against the white snow. When this energy collides with nature, new lives will ‘blossom’ on the earth. This was the initial idea behind the creation of Earthborn. 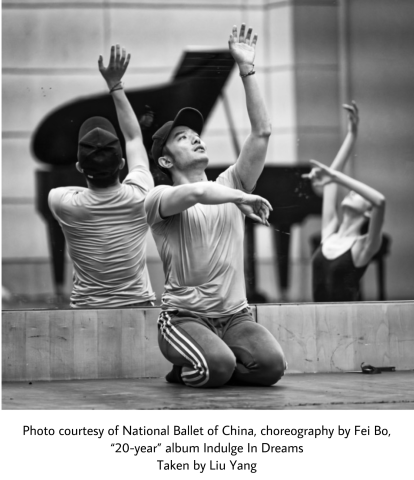 In 2020, the outbreak of COVID-19 caused difficulties for the creation of this dance piece. Performing companies and theatres around the world experienced a prolonged shutdown, and the premiere of Earthborn was postponed until September 2022. Even at the height of the pandemic, Fei Bo and the Finnish artists continued to work together, exchanging ideas through online meetings and video rehearsals. In addition, Fei Bo put his deep understanding of life triggered by the pandemic into the work. In his view, the discussion of “life, death and rebirth” often touches on the core of different times and civilisation, and the expression of Earthborn has a stronger relevance in the context of the dramatic changes in the world brought about by the epidemic.

Earthborn symbolises a new dialogue and integration. From the primitive civilisation to the modern city, from Finland to China, whether it is Fei Bo’s collaboration with dancers of Finnish National Ballet and the lighting designer Mika Haaranen, the composer Qin Hongyu’s cooperation with Finland’s iconic Vilda, or costume designer Li Kun’s fusion of Finnish folk costumes with Chinese minority costumes, the spirit of world dance is evident everywhere, as well as the unique beauty that emerges from the collision of commonality and individuality.

A month before the premiere of Earthborn, Fei Bo was invited to Finland again to put the finishing touches on the work. As expected, Earthborn brings a dialogue of the heart and an infinite reverie about life across borders on the stage of the Finnish National Opera. 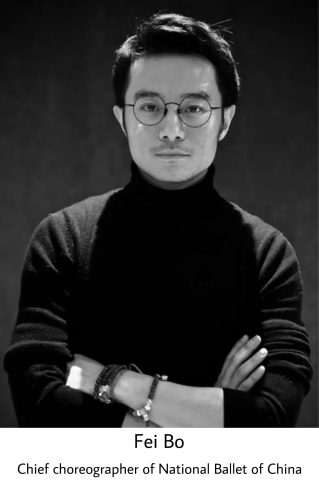 Born in a family of tradition opera, Fei Bo began to learn dance in 1992, tried to do choreography at the age of 16 and studied modern dance in 1998. After his graduation from Beijing Dance Academy in 2002, Fei Bo joined the National Ballet of China and had created many pieces for the company. Since then, he became active in the international dance field and collaborated with many renowned choreographers such as Philippe Decouflé and Akram Khan. He has won multiple international awards, such as the Best Choreography Award at Helsinki International Ballet Competition in 2005 and 2012 respectively, the Chinese Choreography Award at Shanghai International Dance Competition, the Best Modern Dance Prize at US YAGP, the Best Modern Dance Choreographer Award at the First Ballet and Choreography Competition held by National Centre for the Performing Arts and the nomination for the Best Choreography Award at the Moscow Benois de la danse. In 2008, he participated in the creation of the Chinese ballet The Peony Pavilion, which was later invited to Hong Kong Arts Festival, Edinburgh Festival and Lincoln Center Festival etc. In 2017, he joined in the production of the Chinese ballet, Dunhuang (Light of Heart), as a director, librettist and choreographer.

Fei Bo has always been committed to exploring Chinese style dance works, trying to collaborate with different artists and exploring the oriental body language in practice. At the same time, he travels and performs internationally, using an oriental perspective to dialogue with art from the West. He was invited to create a one-act play A Room of One’s Own and Shenren Chang for the Hong Kong Ballet. In 2011, he helped Tamara Rojo, former Royal Ballet lead principal dancer and current director of the English National Ballet, to create a dance piece Life is a Dream, at the same time, participated in the CNN documentary Fusion Journey. In 2012, he was invited to the Bolshoi Theater in Moscow to stage one of his pieces. In the same year, Fei Bo won the Rockefeller Asian Culture and Art Fund Award and had a study tour in the United States.

His primary choreography includes: The Peony Pavilion, The Light of Heart, Bolero (NBC Version), A Room of One’s Own, Confucius 2012, Shenren Chang, The First Ray of Light, Sacrifice, Hold the Gun, Dandelion, On the Road, Once Upon a Time and Over There, etc.