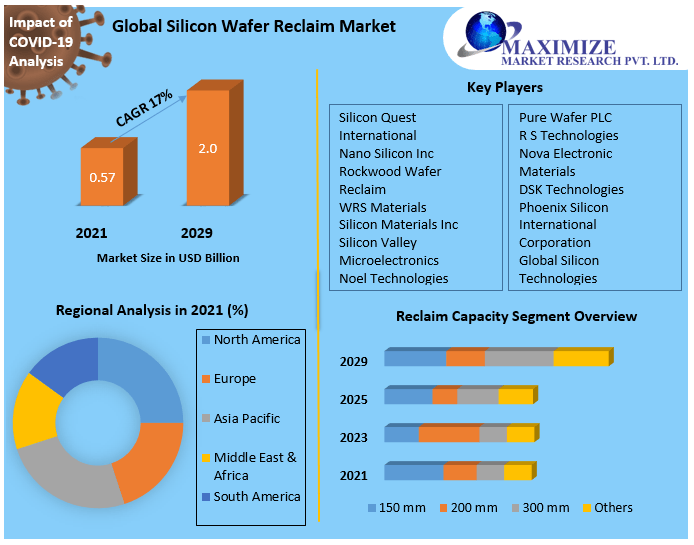 Pune, Dec 05, 2022: As per Maximize Market research, a global business research and consultancy firm, the total global market for Silicon Wafer Reclaim was USD 570 Mn. in 2021 and is expected to grow at a CAGR of 17% over the forecast period to reach over USD 2000 Mn. by 2029.

Wafer reclamation is typically defined as “a processed silicon wafer that has been stripped, occasionally polished, and eventually cleaned; can be reused for a different purpose.” Wafer reclamation is the process of converting a used wafer with many layers of various materials into a usable test or certification wafer at a lower cost than acquiring a new test wafer. While recovered wafers are sometimes thinner than fresh wafers, they often give the same performance and may be used for many of the same applications.

Rapid economic growth in recent decades has revolutionized lifestyle, causing a tremendous increase in the production, use, and disposal of products, particularly consumer electronics. In today’s conventional electronics, such as computers or mobile phones, millions of high-performance, ultra-low-power devices are carefully integrated into extremely tiny areas on hard and brittle but low-cost bulk mono-crystalline silicon wafers. Silicon is responsible for 90% of all industrial electronics. As a result, manufacturers developed a generic low-cost restorative batch fabrication process for converting such wafers full of devices into thin, mechanically flexible, optically semi-transparent silicon fabrics with gadgets, and then recycling the remaining wafer to generate multiple silicon fabrics with chips and devices, ensuring low-cost and optimal utilization of the entire substrate.

Semiconductor manufacturers frequently employ test wafers to optimize and monitor their manufacturing operations. A large fab may spend $2 million each month on test wafers that cost more than $100 each. Due to the large number of test wafers required, silicon is by far the most costly material in semiconductor production fabs. More than 27 million test wafers are used in the industry each year, thus chip makers are attempting to extend their life span by reusing them as many times as possible through a reclamation process.

North America held the biggest market share in 2021 and is expected to dominate the market by the end of the forecast period. Increased solar panel installations in the United States are driving up demand for silicon wafers for reclamation services. Furthermore, emerging technological improvements, soaring demand for low-cost silicon wafers for the semiconductor industry, and the presence of well-established industry players in countries such as the United States are expected to drive regional market growth.

If you have any questions please feel free to contact our analyst at: https://www.maximizemarketresearch.com/request-sample/63852

Maximize Market Research provides syndicate as well as custom-made business and market B2B and B2C research on 6,500 high-growth emerging technologies and opportunities as well as threats to the companies across the  Chemical, Healthcare, Pharmaceuticals, Electronics and Communications, Internet of Things, Food and Beverages, Aerospace and Defense and other manufacturing sectors. Maximize Market Research is positioned to estimate and forecast the market size with the competitive landscape of the industries. Additional information is available at https://www.maximizemarketresearch.com/.

Arakkal Gold and Diamonds the house of splendid and queenly jewellery.